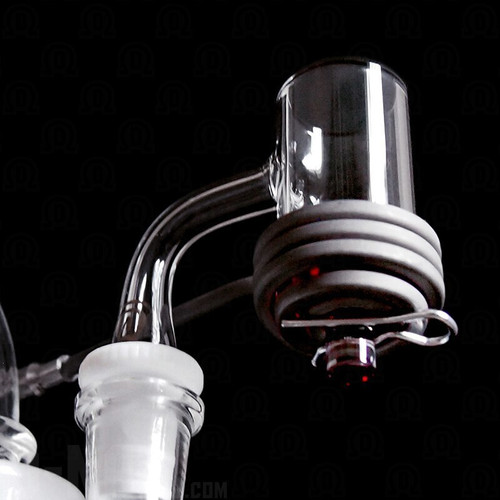 Availablility: Currently, the American quartz industry is running on a 2-8 month lead time. We are trying to keep everything to 4 weeks. Everything is made to order at present. We do have extras made, and usually have a variety in stock. But, there is no good way to have everything immediately available. We are doing our best to stay ahead of everything to get you exactly what you want.

What we have been referring to as 'Thermal' quartz is a special form of rare earth infused fused quartz with special thermal properties. This is the first electric-heater compatible design using the material, but it is just a step in what is a new development path for quartz in general- quartz/quartz hybrids. Here, the upper bodies are made with standard quartz tubing, while the lower portions are custom assembled by hand using techniques Black Market has been developing since summer of 2019.

It's really cool work! There are some really sophisticated parts are on deck with really complex builds behind them, but that's for later.

For now, the shortest possible way of putting it is that the flavor is better.

The thermal quartz is able to (comparably) rapidly deliver and redistribute energy across its surface, allowing oil to vaporize and escape at faster, more optimal rates.

Notably, "flavor" also means the of chemical integrity in general, which is key to pharmacology.

Quartz with precision temperature control has long been one of the pinnacles of the art, and here, we take that just one more step further along.