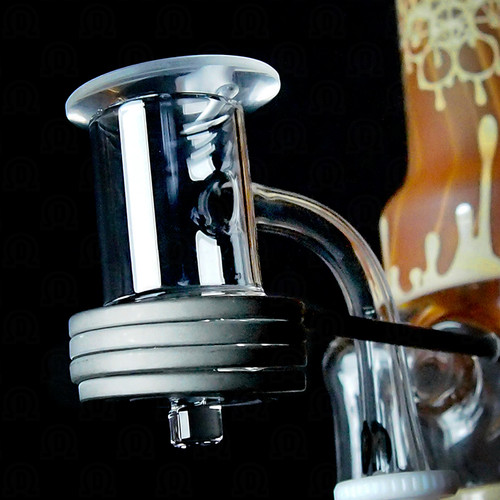 Precision crafted by the godfather of quartz, Ron Rawson aka Pukinbeagle, these are masterworks of design and exectution.

The E-Toric is a highly specialized nail.  Like really.  Concept, design, construction, use, cleaning - all specialized.

That being said, here's some of what that means:

First, the nail is based on the same 'pneumatic thin film evaporator' concept as the rest of the Toric series.  The track's shape is limited by what can be done with heaters, but the same effect is acheived.  Mixing the oil efficiently into thin film in an evenly heated mixing zone is fundamentally the most effective way of vaporizing it with minimal degradation.

The recommended cap for this design is the periscope cap - tilted to rifle the airflow off the wall.  Plenty of other caps willl work - including lens and channel caps - but the expanded track requires a bit more care and practice to get working correctly.

Cleaning is a little tricky.  Cotton swabs take a little more aim, and the main challenge would be more from going in 'blind' where the heater blocks your vision.

Please allow 2-4 weeks for nonstandard size/joints.  Ron is not making as many nails as he used to, and we cannot stock ev